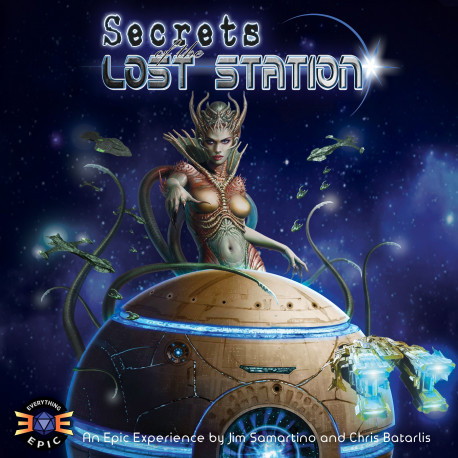 Secrets of the Lost Station

Description from the publisher:

With a new highly detailed story and thematic universe, extending the lore of the Secrets of the Lost Epic Saga, Secrets of the Lost Station will stand on its own, as a new Core Game, while also allowing players to expand upon the original Tomb-Crawling core game.

Players assume the roles of the last surviving members of an over 4000-year-old secret society known as the Eternal Order of Perseus; with their perpetual mission: to face intergalactic dangers, seek out and collect alien artifacts of immense power, to protect humanoids from the otherworldly powers in the fight against their mortal enemy a primordial race known only as the Great Old Ones. An ancient race that exists only to feed upon the life force of planets. World-killers that must be stopped once and for all…

The Details:
Each of the game’s "Story Telling", Exploration-Driven Scenarios has its own unique theme, flavor, and powerful boss monster bringing you into the rich and detailed world of The Station.

Prepare to face Ra, God of the Sun, but not as you know him from legend, but an alien race imposing his will upon the great technology of The Ark Station. Drive back the forces of the Elder Forces of Cthulha, Empress of R'lyeh and stop her from destroying the station, creating imbalance and chaos to the galaxy!

Each scenario offers new challenges and rewards. There are many stories that await the players’ fateful choices leading them to thrilling adventures and cliffhangers!

Working with allies against the challenging objectives and scenario triggered events is vital to saving the universe from these untold adventures and misadventures that you will explore.

During the Adventurer’s Phase, players take actions to progress through the Scenario, face Combat with monsters, while overcoming the hair-raising Trap Rooms and sensational Story Cards.

As you explore new MODs, or rooms of the station, your world will fill with untold delights, with each step into a sacred sanctuary of ancient technology of a civilization of old. From the super-computer filled rooms, to the hyperdrive power cores, through the stasis chambers, and the intergalactic astrogenesis maproom, the station is yours for exploration and its secrets are yours for the knowing…

Dangers are everywhere as you encounter these breathtaking wonders… but so are the rewards. Lethal Weapons, Enchanted Artifacts, and new undiscovered tech will help you survive each frantic step.

You may face a gruesome monstrosity that will push you to the brink of death, however upon defeating that monster, you will feel reinvigorated to reach out for that Artifact of Immense power and press on facing all that The Station can throw at you.

Station Cards send orders to lurking monsters to move and attack, spawn a new, apply status effects, and progress the Station Track … foretold by the ancient AI on the station… The station has a mind of its own... if the Station is in too much danger, it may decide to self-destruct rather than fall into the wrong hands.

With the main Cooperative Story Mode, many unique Adventurers to choose from, tons of unique and detailed room tiles, tons of tokens, and hundreds of cards, Secrets of the Lost Station offers an Ever-Evolving, EPIC, Space Station-Crawling adventure every time you play.