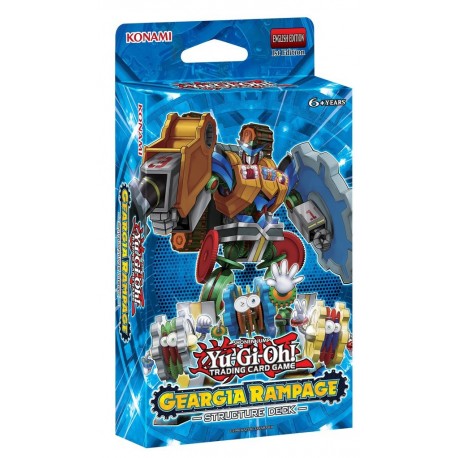 Geargia Decks are one of the hottest tournament Deck themes for the Yu-Gi-Oh! TRADING CARD GAME, and are at the core of the brand new Geargia Rampage Structure Deck! Geargia cards are versatile and really good: their strategy is based around teamwork and Geargia monsters can Special Summon more Geargia monsters, or add them to your hand for free. Since Geargia monsters are also Machine-Type, you can even use them with other Machine monsters from other Decks to perform some explosive combos. Things only get better for Geargia strategies with the introduction of three new monster cards including a brand new Geargia Xyz Monster that can shut down your opponent’s cards during battle. New Duelists can now get their hands on these popular cards while advanced Duelists can support their existing Geargia Decks or other Machine-Type Decks to bolster their strategies.