Naruto Boruto Card Game is a compilation featuring Naruto, Naruto Shippuden, and Boruto!
This set includes cards from both Naruto and Naruto Shippuden. Choose your favorite characters to build a deck or play to win with a powerful, custom deck!
For fans of Naruto and fans of card games and boardgames alike, this is a card game that everyone will enjoy!

From the mind of renowned American game designer, Ryan Miller, comes Chrono Clash System.
The cost of the card moves the marker towards the opponent's side, and when it goes over 1, then it's your opponent's turn!
Play many low cost cards or play a high cost card from the get-go.
Play your favorite cards whenever you want in this dynamic but easy to play game!

This is the cost!

1: Move the marker 5 spaces and Summon a card!

2: Combat initiative swings to your opponent!

All gameplay effects are shown as icons.
So whether playing strategically or casually, all fans can pick up and play a game with ease.

Return one of your battlers to its owner’s hand.

Your other battlers gain +2 strength when they attack. 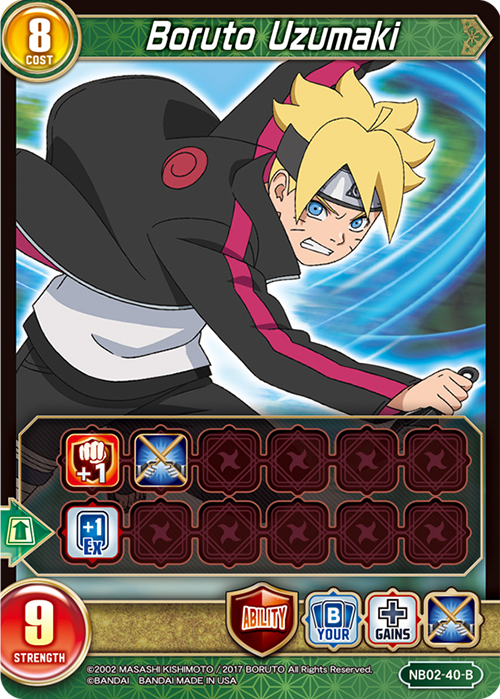 This guardian ability gives your other battlers sentinel until the end of the turn. If you have tapped battlers in play, the guardian attack on Boruto Uzumaki will resolve and no further attacks against your guardian stack can take place until the end of your opponent’s turn.

There are 2 ways to win with Chrono Clash System.

1: Whenever a player is attacked while they have no guardians, they are eliminated from the game. The last player standing wins the game!
2: If you ever have 5 or more completed quests, you win!

The path you take to victory is up to you! Experience the heat of battle in a game with 2 different victory conditions!

Chrono Clash System is a combative card game.
Play head-to-head or with up to 4 players.
Bring your own deck into epic and exciting battles!